Underwear as outerwear. A trend that’s come and gone for decades. From Madonna’s cone bra to Gaga’s rubber leotards, flaunting the female skivvies has been a tried and true weapon of sex appeal again and again. Over the past couple of years, the onslaught of this weird “sexy-space age” trend in pop culture has brought underthings back into the spotlight. From the crazy spandex stage ensembles seen on so many artists, the less is more/body-conscious trend has trickled down to us droning masses in the forms of leggings, bandage skirts, and the infamous “bralet” or bra top, as I prefer to call them. Anything -let just reminds me of piglet, which I’d rather not have in mind when choosing my clothing. Anywho, in this post I’m going to explore the lingerie-inspired avenues of this trend, which in my opinion are a little more wearable than spandex catsuits and crazy astro-garb. Less dated, as well. I pity those girls who will look back on photos of themselves in crazy geometric print spandex, platforms, and green hair. I applaud their bravery, but I’m hoping to keep my advice and inspiration in this blog at least somewhat practical. I am a firm believer that as easy at is is to look awful, its also that easy to look amazing. A lot of people just seem to be doin’ it wrong. BABBLING! Back to the task at hand. Let’s start off nice n easy with “bralets” (yep, now I have piglet stuck in my head). An absolutely ADORABLE little piece that can actually look great on almost any body type- when. done. right. I repeat- when done right. 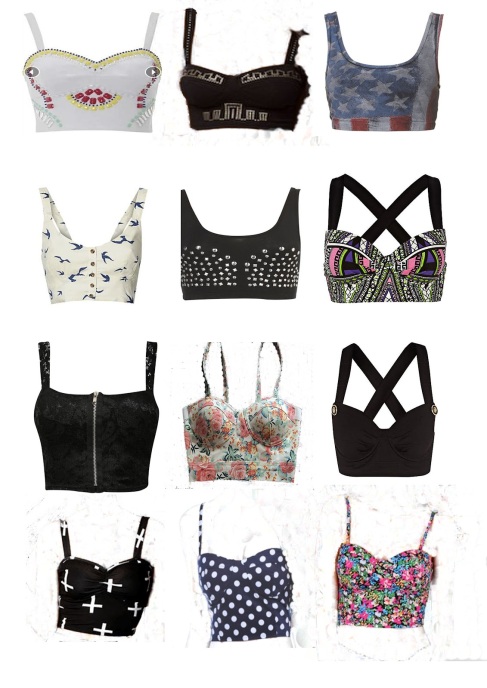 As you can see in the celeb photos above, this look is nicely complimented by the high waisted trend. Though in these hot-mama’s cases it was just for modesty’s sake, this also makes the look more wearable for those who’s midsections aren’t so fergalicious. Another way you can rock this look modestly, or unembarrassingly, is to wear it under a low cut shirt. I am a huge fan of plunging necklines, but as I am rather buxom myself, going sans bra is never an option. This sweet little trend allows me to wear deep cuts and show off my cute under thing! Without it being a WHOA THERE you’re bra’s falling out!– type situation. The best photo I have to show this is one from my last post where my sister wore a F21 mesh bralet and criss-cross back top ( worn backwards) ensemble I purchased online. Now its a little more R rated on me considering our bustlines differ greatly, but you’ll get the jist from the photo.

See, super hot! And technically not showing any more skin than a regular tank top. I love this trend because its not necessarily anymore revealing, but rather symbolic- or.. I can’t think of a better word. People see it and recognize it as underwear immediately. Anyways it makes the imagination go crazy while not actually flashing more flesh than is appropriate. Effortless sexy points.

This next photo is just random in that I really want a black leather bra top, very biker-chic/fetishistic

I thought it might be fun to include a little history lesson, or flashback if you will. When embracing this trend, one should pay homage to the godfather of underwear as outerwear, Mr. Jean Paul Gaultier.

Gaultier pioneered the look, probably most noticeably beginning in the 1980’s and early 90’s with his 1990 creation of Madonna’s infamous cone bra. His sexy, unexpected designs are still worn best by the freaks, sirens, and colorful characters in modern celebrity culture, including Marilyn Manson, Lady Gaga, and Dita Von Teese to name a few.

Dita Von Teese, a longtime fan and muse of Gaultier. He designs many of her amazing burlesque ensembles.

Mila Jojovich as Lilu in The Fifth Element, wearing the famous bandage outfit designed by Gaultier. He designed the costumes for many major motion pictures including The Fifth Element, Kika, The Cook, the Thief, His Wife, & Her Lover, and The City of Lost Children.

JPG, we salute you.

So back to our main discussion, Here’s just a few more quick photos of celebrities rocking the undie trend.

Lady Gaga. Totally hot (the outfit, that is) and totally not every-day office wearble. Damn. Maybe that’ll change, though 🙂 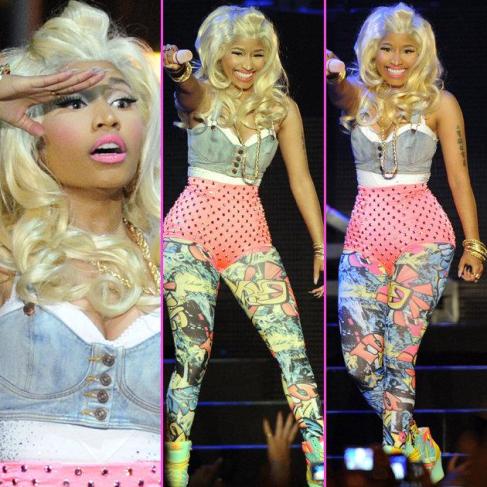 Nicki Minaj. So this is a little ghetto space-crazy, but I wanted to include something a little more colorful amongst all this black and white. 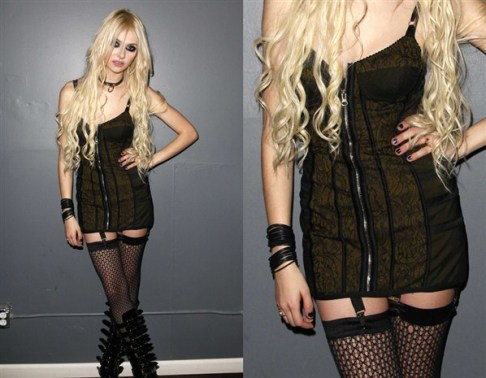 Taylor Momsen. For the record, I don’t really like her. Something about her just irks me. You are forever Cindy-Lou Who, not a sex kitten, little girl. But man, that outfit! It’s exactly the kind of look I’m talking about here. Love exposed garter straps!

Sofar, the looks I’ve talked about here are very much geared towards a certain age range- actually my whole blog is in some ways- so I want to include another way to try out this trend thats even MORE wearable. If you’re super opposed to any Madge-crazy or Momsen-sultry underwear as outerwear looks, think about maybe trying out just a slip! Many of you are probably familiar with the slip-as-a-dress look, but take it one step further (and better) with the right styling.

You can sport a sexy cozy-chic look if you throw a floaty oversized sweater over it, think Rihanna ala “What’s My Name” 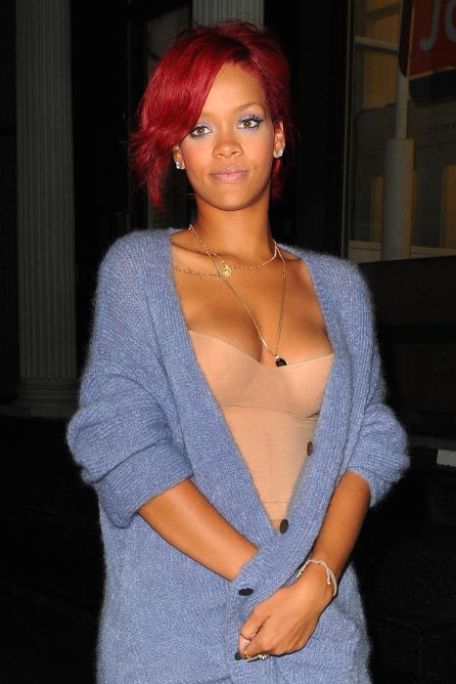 OR make it edgy with some leather or studs. Great contrast to a lacy, silky, feminine slip. 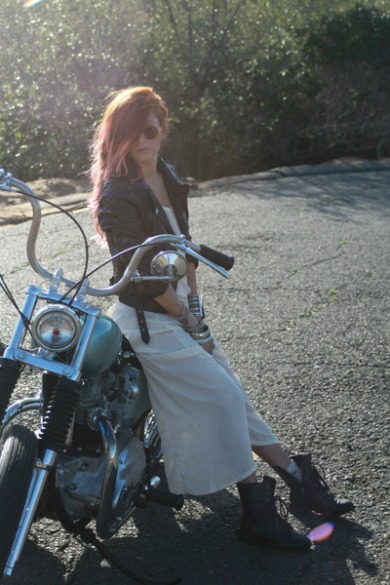 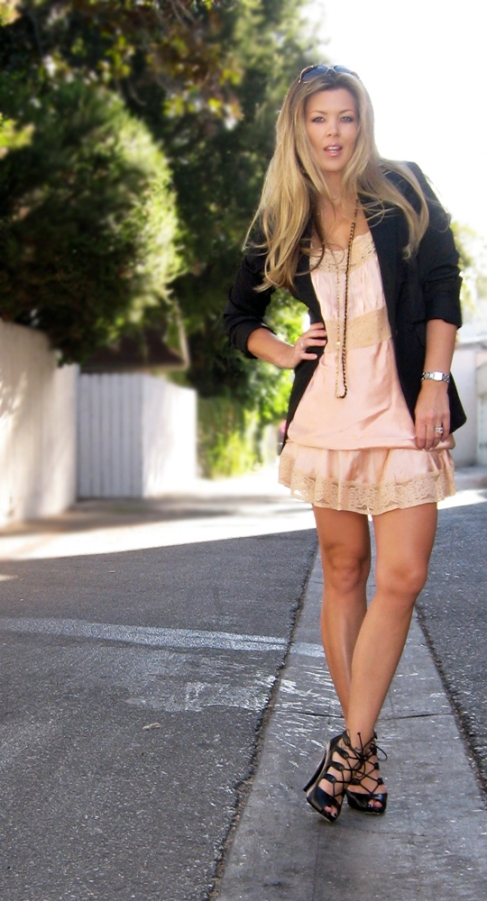 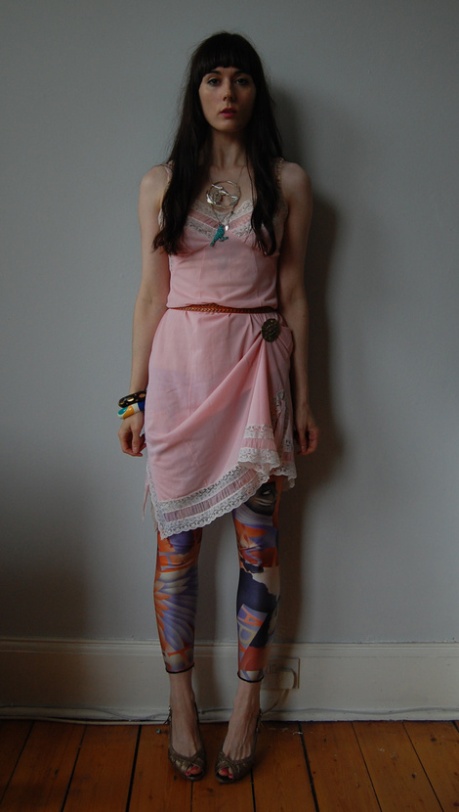 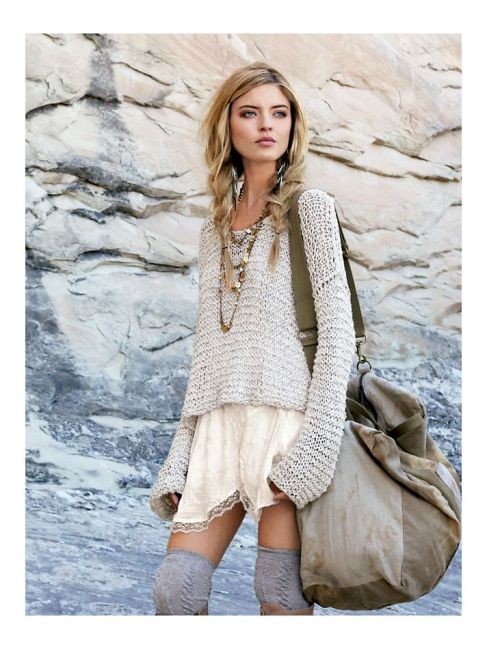 So turn on some Edith Piaf, pour yourself a glass of wine (I mean grape juice, right, kids?) and start sifting through your underwear drawer, you might just find the perfect outfit you never knew you had 😉

PS- One more thing to share! I have been drooling over the Alexander Wang Donna hobo after one of my favorite style bloggers bought one, but its ridiculous price kept it far, far from my grasp. However a routine trip to the thrift store proved quite extraordinary when I found an H&M knock off of the Donna that I never knew existed, and for $4 no less! Happy Happy Joy Joy!

My knock off thrift store find on the left, and the real thing on the right. 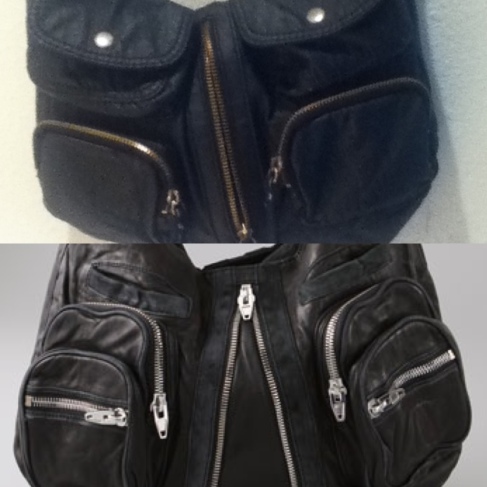 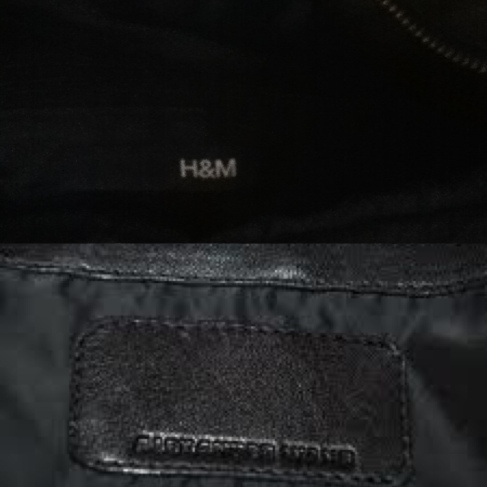 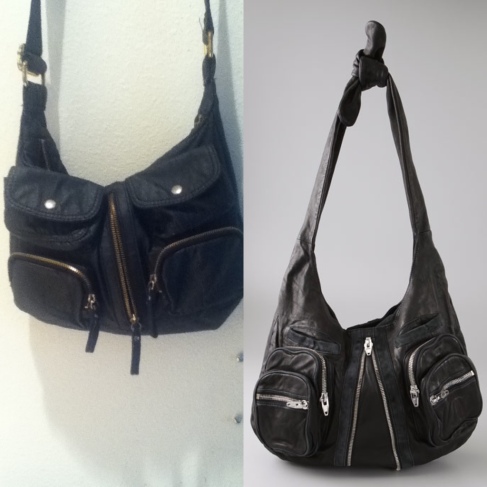